Salbutes are a corn-based cuisine by meztizos, a tasty on-the-go dish. Belizean salbutes is found in any local street vendor or deli. Salbutes are a perfect choice for lunch, dinner, or a late night snack before going out! So if you had them when you were in Belize and miss them, now’s the time to make them for yourself!

In this blog post, find our recipe on how to make delicious Belizean salbutes at home!

*Red (or black) recado is a key ingredient in several Belizean dishes due to the RICH flavor it adds when stewing meat.  Find it in markets in the United States as anchiote paste in Mexican/Latin American markets. There are also recipes for making recado from anchiote seeds from scratch if you cannot find paste already prepared.

It often seems like many Belizean (and Latin American in general) dishes are some variation of a corn based tortilla with a sprinkle of meat, vegetables, and perhaps cheese.  If you’re on Ambergris Caye – here’s some great places to eat local food.

First, you have the garnaches with a hard, flat corn disk, a smear of beans, and a sprinkle of dutch cheese. The corn tortillas get fried to the point of being crunchy. The topping ingredients for garnaches include beans, cheese, and sometimes a sprinkle of onions or cabbage, making it easier to make than salbutes.

Next, there are panades, which can be described as a crispy pocket of goodness made from deep-fried corn tortillas. They are typically stuffed with fish, beans, or chicken. Panades usually gets served with pepper salsa, cabbage, onions, and cilantro to give it that perfect finishing. It is one of the most loved appetizers in the country, and outside Belize, the delicacy is known as an empanada.

Then the salbutes, which happen to be one of our favorites. Let’s go ahead and get started!

Below see a photo of Salbutes prepared at Blue Bayou at Secret Beach on Ambergris Caye. 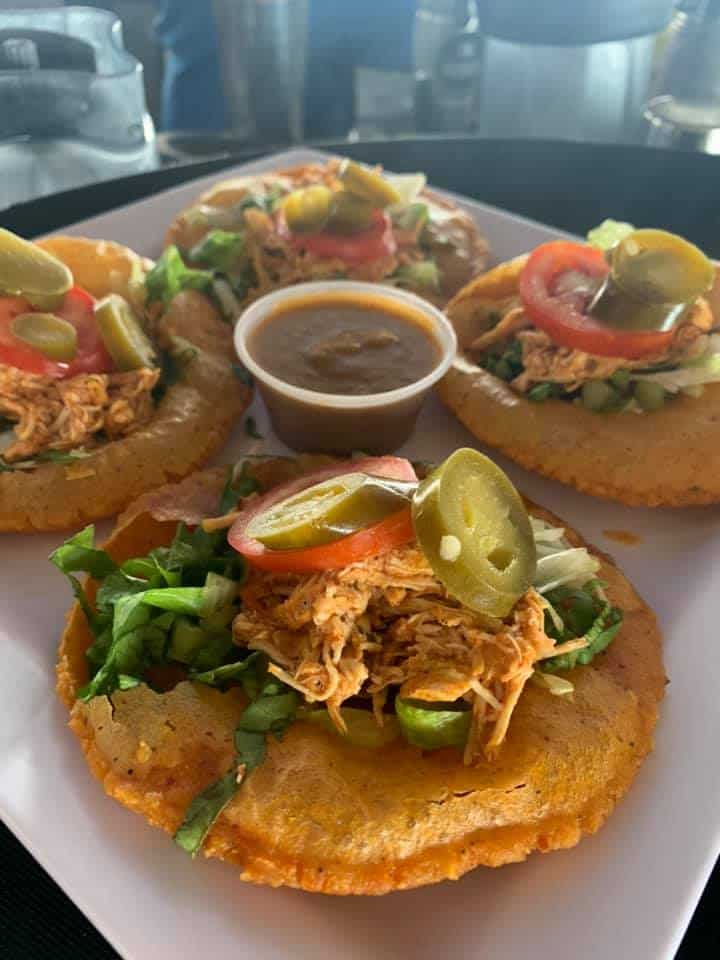 We hope this recipe hits the spot. I know what it is like to be craving something you tried once abroad. Just remembering the name of a dish is a challenge at times. But, once you have the opportunity to make it for yourself and whisk yourself back to your dream vacation in Belize!

While taking advantage of all the stunning sites and activities Belize has to offer, you need accommodations that provide comfort, convenience, and a community to enjoy it with. This is why Drift Inn is where you need to stay. Our affordable, comfortable rooms all come with handmade Belizean furniture and premium mattresses, private bathrooms, A/C, hot water, and WIFI. Spend your time chilling in our courtyard or wandering the small streets of San Pedro, Belize. The convenience of our location is unparalleled for our prices. Stay 100 feet from the beach and walking distance to restaurants, grocery stores, fruit stands, and street food.

Drift Inn is an affordable hotel / hostel with a community of travelers who live to travel and enjoy finding themselves interacting with new people and trying new things. Stay with us as a solo traveler, digital nomad, a friend group looking for a Caribbean adventure, or for a fun getaway with your SO. Drift Inn offers opportunities to meet other guests including tours for snorkeling trips, day trips to Secret Beach, the Iguana Sanctuary, dinners, and to see live music. Any tours and excursions can easily be organized by Drift Inn staff, this includes trips to the Blue Hole, golf cart rental, and more!

Contact us to book your stay and start planning out your Belizean dream adventure.

This site uses Akismet to reduce spam. Learn how your comment data is processed.